Energy-efficient buildings are only effective when the occupants of the buildings are comfortable. If they are not comfortable, then they will take alternative means of heating or cooling a space such as space heaters or window-mounted air conditioners that could be substantially worse than typical Heating, Ventilation and Air Conditioning (HVAC) systems.

Thermal comfort is difficult to measure because it is highly subjective. It depends on the air temperature, humidity, radiant temperature, air velocity, metabolic rates, and clothing levels and each individual experiences these sensations a bit differently based on his or her physiology and state.

A cold sensation will be pleasing when the body is overheated, but unpleasant when the core is already cold. At the same time, the temperature of the skin is not uniform on all areas of the body. There are variations in different parts of the body which reflect the variations in blood flow and subcutaneous fat. The insulative quality of clothing also has a marked effect on the level and distribution of skin temperature. Thus, sensation from any particular part of the skin will depend on time, location and clothing, as well as the temperature of the surroundings.

There are six factors to take into consideration when designing for thermal comfort. Its determining factors include the following:

A method of describing thermal comfort was developed by Ole Fanger and is referred to as Predicted Mean Vote (PMV) and Predicted Percentage of Dissatisfied (PPD).

The Predicted Mean Vote (PMV) refers to a thermal scale that runs from Cold (-3) to Hot (+3), originally developed by Fanger and later adopted as an ISO standard. The original data was collected by subjecting a large number of people (reputedly many thousands of Israeli soldiers) to different conditions within a climate chamber and having them select a position on the scale the best described their comfort sensation. A mathematical model of the relationship between all the environmental and physiological factors considered was then derived from the data. The result relates the size thermal comfort factors to each other through heat balance principles and produces the following sensation scale.

The recommended acceptable PMV range for thermal comfort from ASHRAE 55 is between -0.5 and +0.5 for an interior space.

The Math behind PMV & PPD

PMV is arguably the most widely used thermal comfort index today. The ISO Standard 7730 (ISO 1984), "Moderate Thermal Environments - Determination of the PMV and PPD Indices and Specification of the Conditions for Thermal Comfort," uses limits on PMV as an explicit definition of the comfort zone.

The PMV equation only applies to humans exposed for a long period to constant conditions at a constant metabolic rate.

Fanger’s thermal comfort model is used to calculate PMV in the following equation2.

Since PPD is a function of PMV, it can be defined as

Adaptive comfort models add a little more human behaviour to the mix. They assume that, if changes occur in the thermal environment to produce discomfort, then people will generally change their behaviour and act in a way that will restore their comfort. Such actions could include taking off clothing, reducing activity levels or even opening a window. The main effect of such models is to increase the range of conditions that designers can consider as comfortable, especially in naturally ventilated buildings where the occupants have a greater degree of control over their thermal environment.

In order to consider adaptive comfort, the space must have operable windows, no mechanical cooling system, and the occupants must be near sedentary and have a metabolic rate between 1.0 and 1.3 met. Also, occupants have the option of adding or removing clothing to adapt to the thermal conditions. 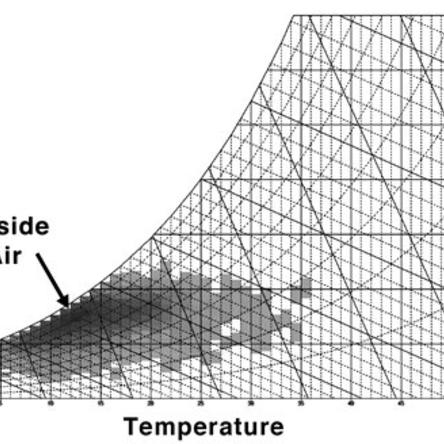 Psychometric charts are a highly useful tool for analyzing temperature and humidity of air. They can help one identify which passive design strategies to leverage in specific climates.