A Trombe wall is a system for indirect solar heat gain and, although not extremely common, is a good example of thermal mass, solar gain, and glazing properties used together to achieve human comfort goals passively.

It consists of a dark colored wall of high thermal mass facing the sun, with glazing spaced in front to leave a small air space. The glazing traps solar radiation like a small greenhouse.  An attached sunspace is essentially a Trombe wall where the air space is so big it is habitable.

Trombe walls are a very useful passive heating system.  They require little or no effort to operate, and are ideal for spaces where silence and privacy are desirable.  Sunspaces are equally simple and silent, and can allow views.  Rooms heated by a Trombe wall or sunspace often feel more comfortable than those heated by forced-air systems, even at lower air temperatures, because of the radiantly warm surface of the wall.

Trombe walls are thermal storage walls, named after the French inventor Felix Trombe.  A typical Trombe wall consists of a 20 - 40cm (8" - 16") thick masonry wall painted a dark, heat-absorbing color and faced with a single or double layer of glass. The glass is placed between 2 - 15cm (1" - 6") away from the masonry wall to create a small airspace. Heat from sunlight passing through the glass is absorbed by the dark surface, stored in the wall, and conducted slowly inward through the masonry.

The glass prevents the escape of radiant heat from the warm surface of the storage wall. The heat radiated by the wall is therefore trapped within the air gap, further heating the wall surface. For a 40cm (16") thick Trombe wall, heat will take about 8 to 10 hours to reach the interior of the building. This means that the room behind remains comfortable through the day and receives slow, even heating for many hours after the sun sets.  Such designs are ideal for use in residential living areas and bedrooms.

In addition to radiant heat, you can also configure Trombe walls to heat air within the internal space. Including upper and lower air vents in the wall allows convection currents, as cooler air from the room enters at the bottom and air heated in the Trombe wall escapes into the room at the top.  These vents must be operable to prevent reverse convention currents occurring at night, which would cool the occupied space. Operable vents also allow the occupants control over instantaneous heating. 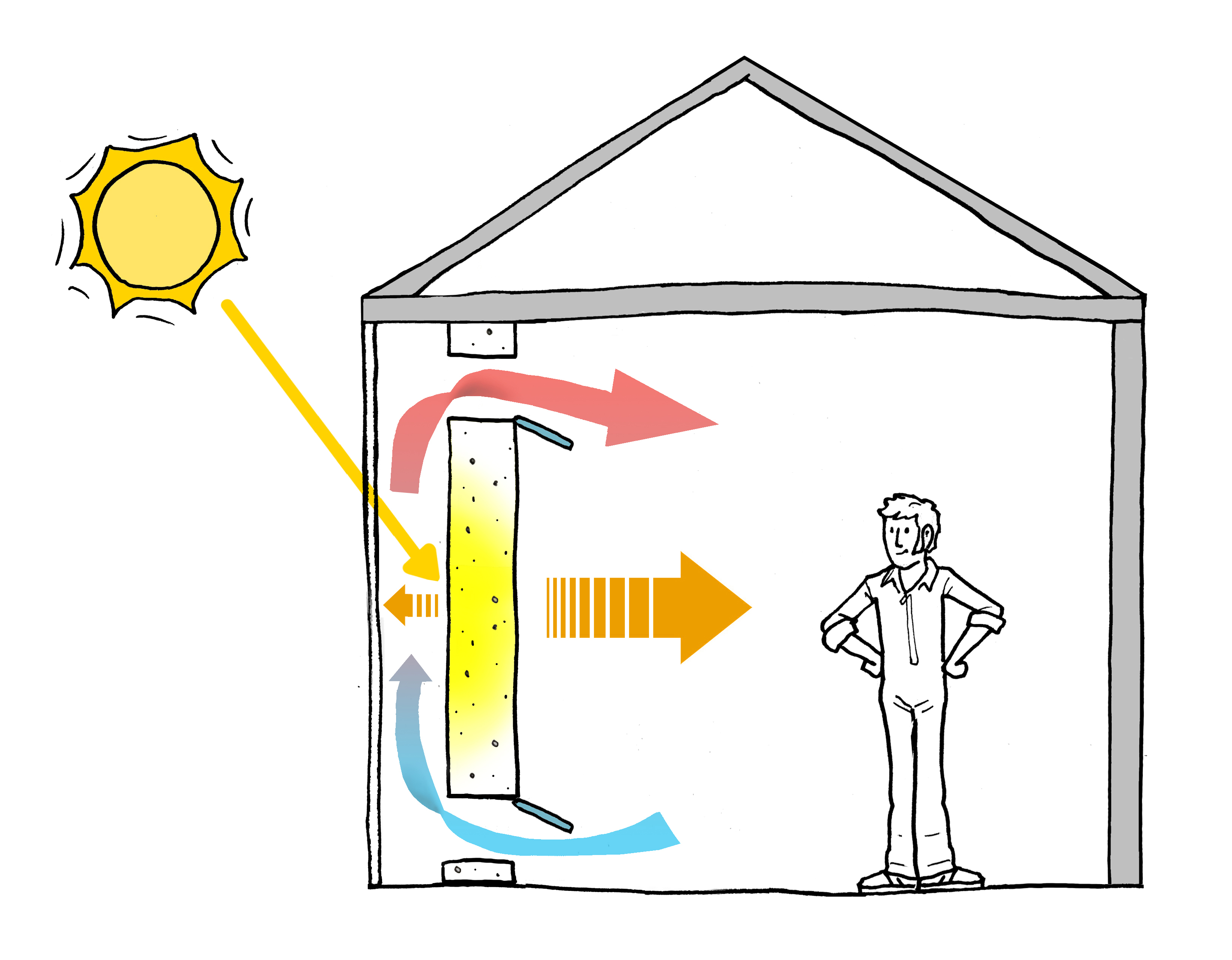 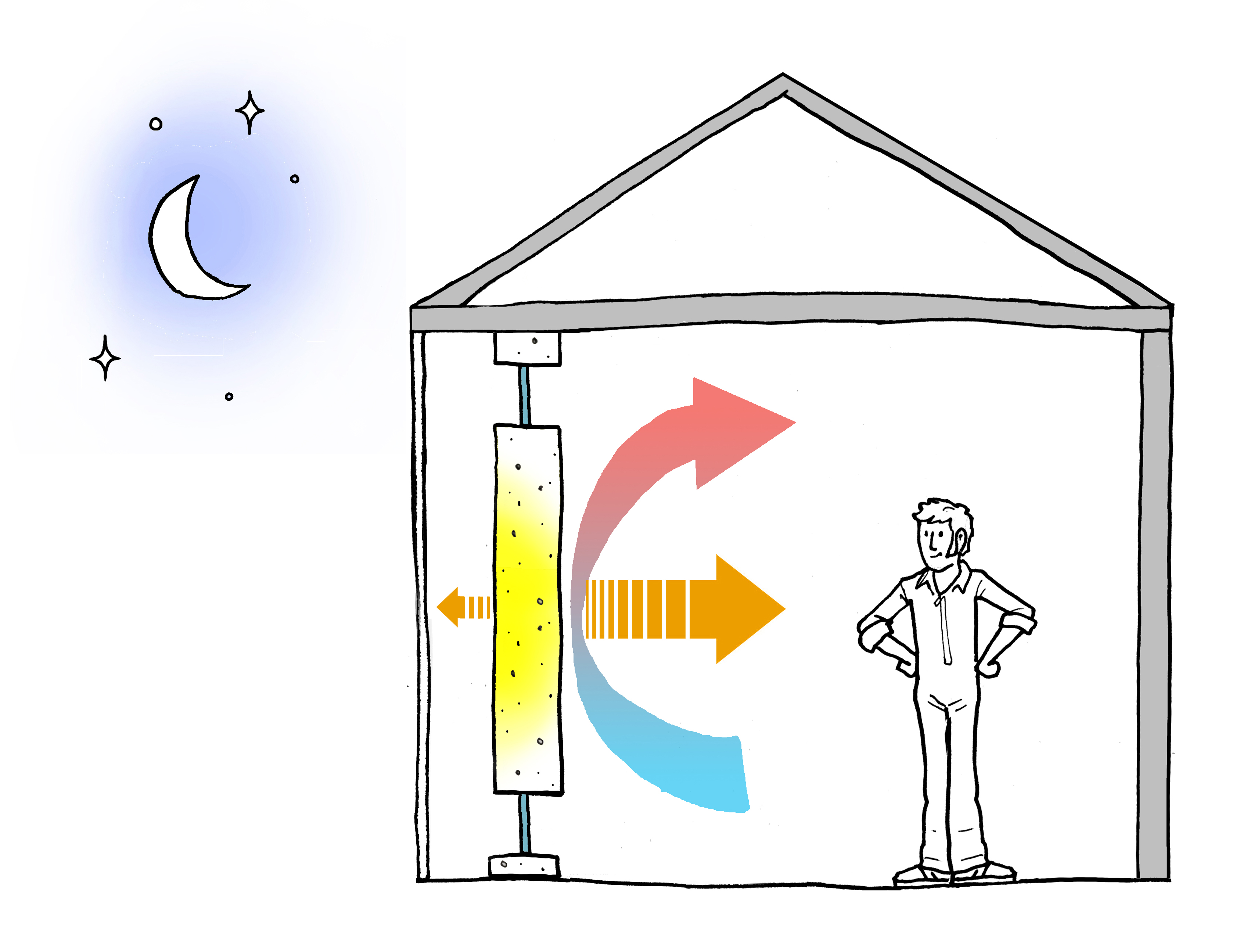 Vents can be shut at night to keep the convection loop moving the right direction.

Using low-E glazing can prevent heat from re-radiating out through the glass of a Trombe wall and greatly reduce the amount of heat lost. Applying a spectrally selective surface or low-E coating to the wall itself can also improve performance by reducing the amount of infrared energy radiated towards the glass. 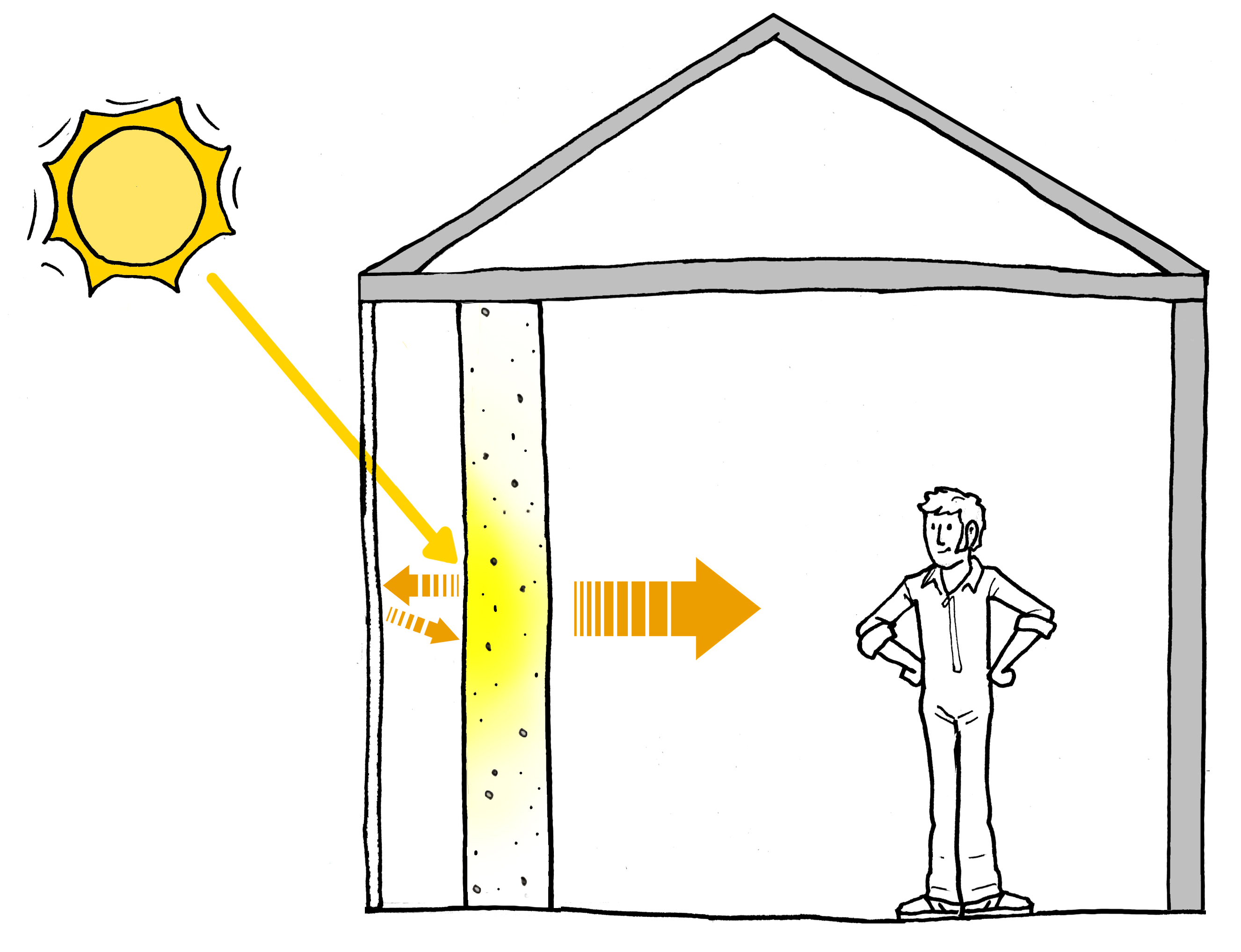 Low-E glazing reflecting heat back into the Trombe wall

To avoid overheating at hot times of day or hot seasons of the year, architects can use Trombe walls in conjunction with overhangs, eaves, and other building design elements to evenly balance solar heat delivery. 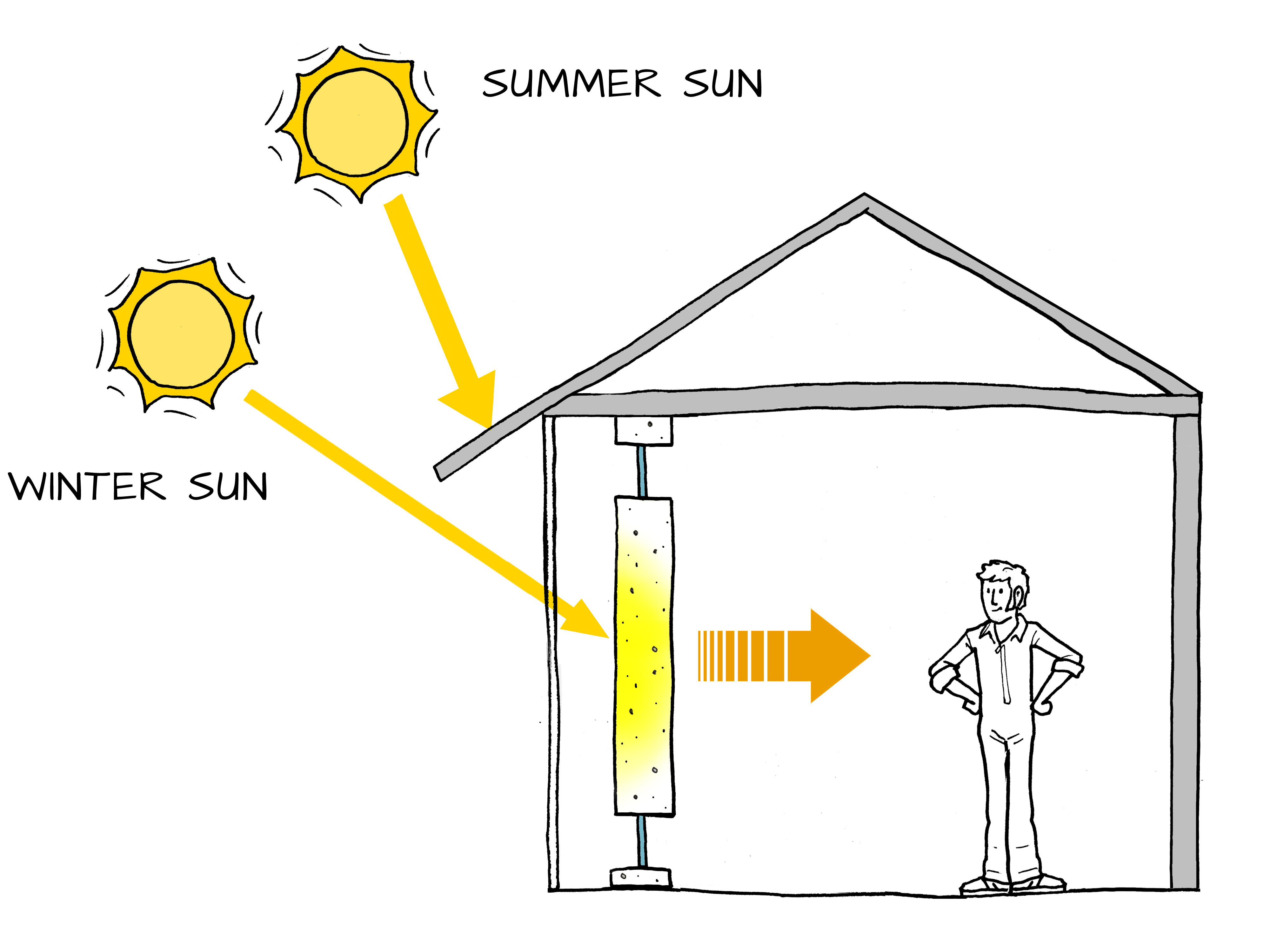 A Trombe wall with overhang to shade from summer sun

Ideally, the glazing should have exterior insulating shutters for nighttime use in order to prevent the heat gained from being returned back to the outside.

While even seasonally-adapting Trombe walls can have no moving parts, you should provide for some method of cleaning the internal area between the glazing and the storage portion of a Trombe wall.

Attached sunspaces (also called "conservatories") work much like vented Trombe walls. They can heat spaces both through radiation and convection.  The difference is that the space between the glass and the thermal mass creates a habitable space. 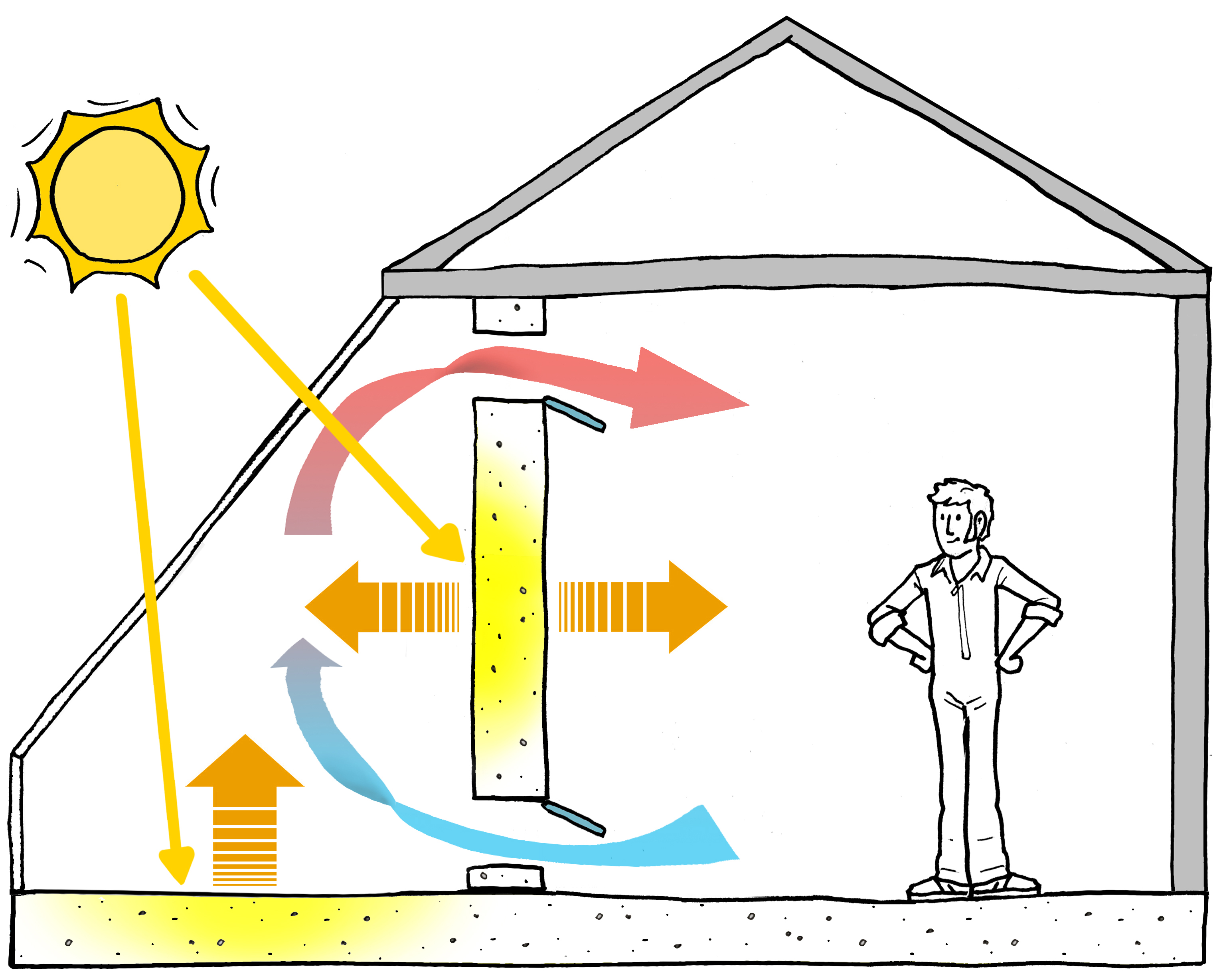 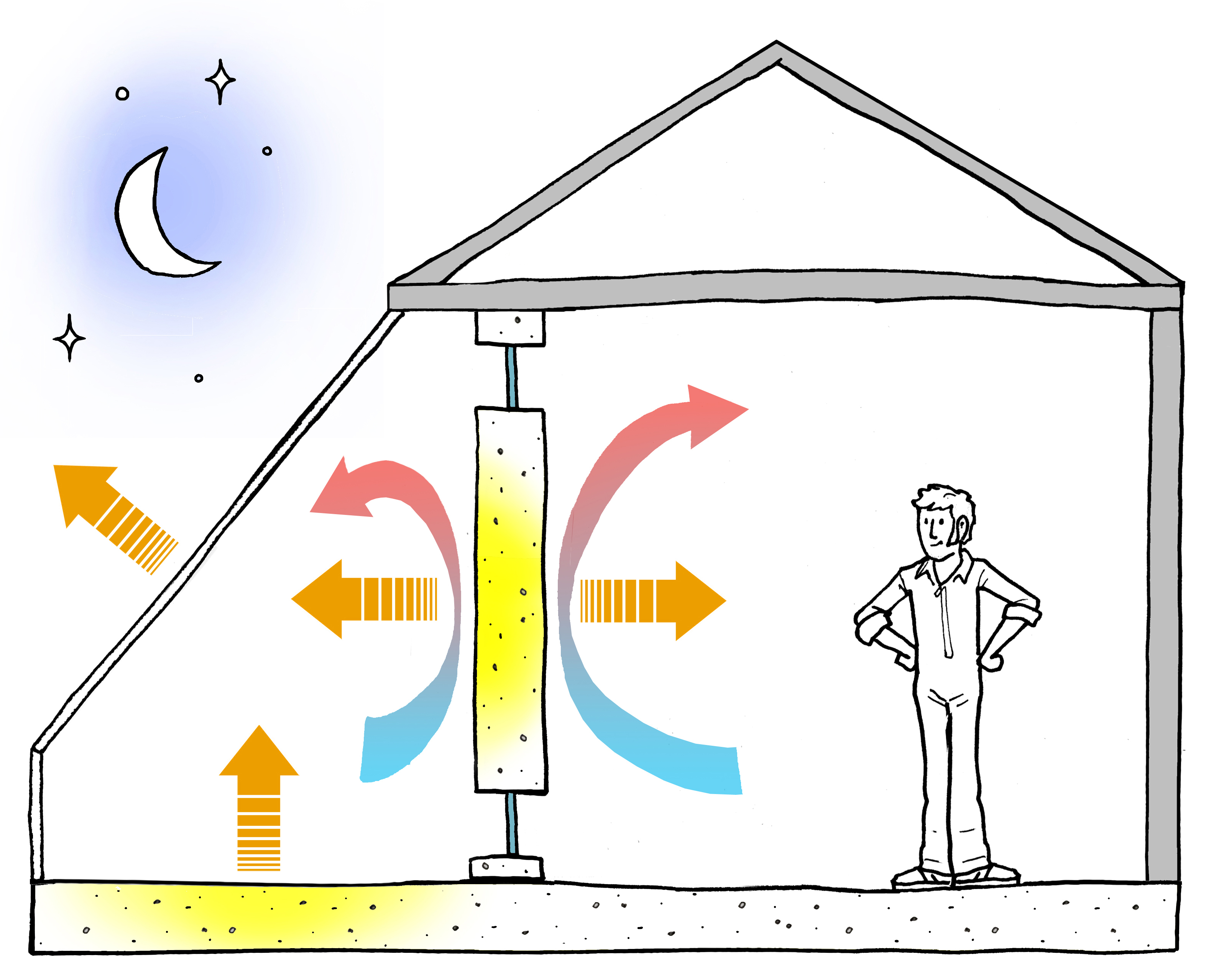 The same sunspace at night, with vents closed, to keep convection going the proper direction

Sunspaces are primarily used for indirect solar heat gain and generally have more glazing area than floor area.  Nighttime heat loss is not as critical in a sunspace as in direct gain systems, since the room can be closed off from the rest of the building.  However, night insulation or double-glazing is recommended if the sunspace serves as living space after sundown.

Important considerations for sunspace design are:

Instead of using masonry, water can be used as the thermal mass of a Trombe wall or sunspace.  Due to convection currents within the water itself, heat is transferred through the entire thermal mass much quicker than a masonry wall that relies solely on conduction. This can be useful when a shorter delay in heat delivery is required.

Such systems can not only bring heat into a space, they can be translucent to bring light in as well.  When using a water Trombe wall, it is better to seal the air between the glass and wall, to further increase the surface temperature of the wall. 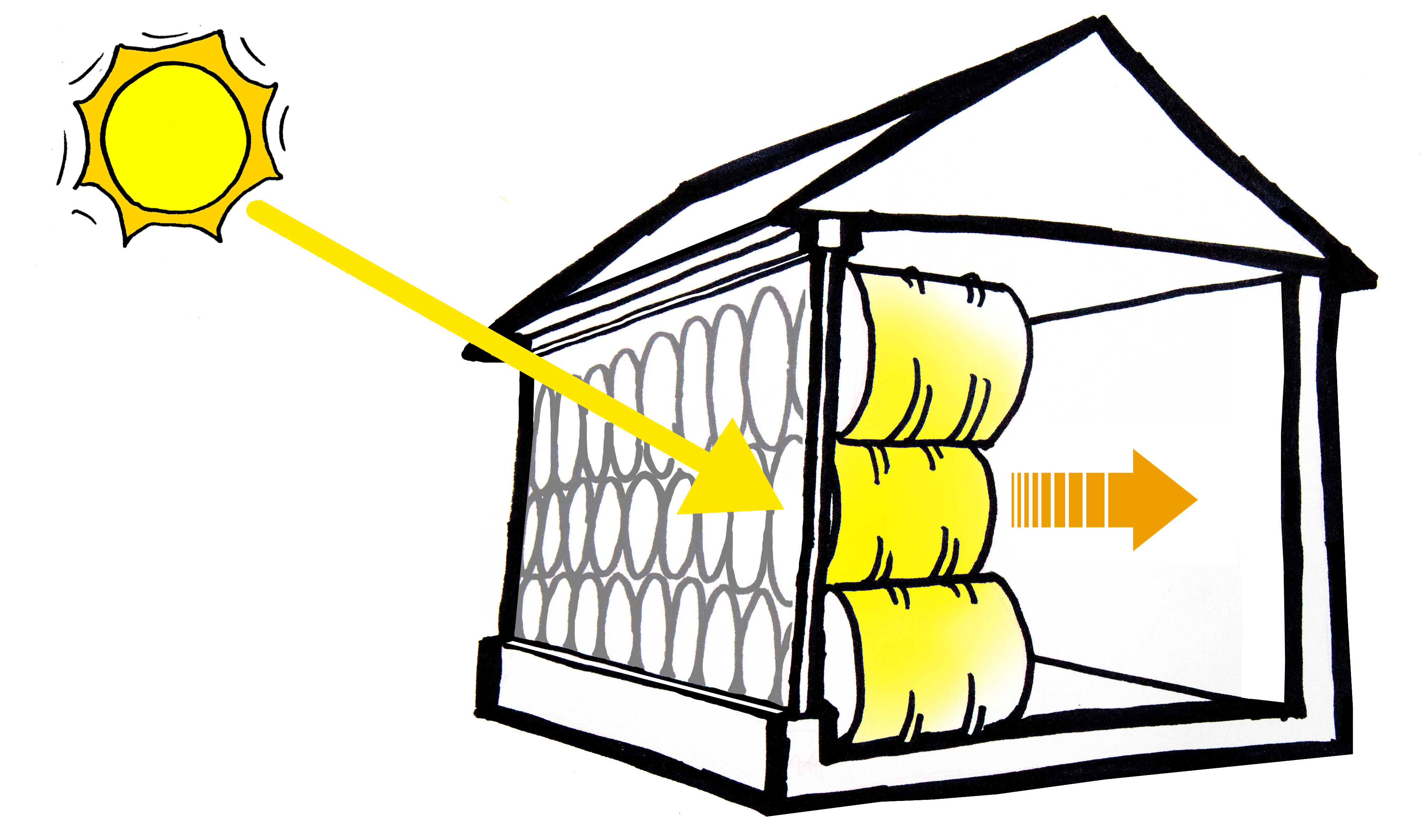 Barrels of water for thermal mass

During hot seasons, a Trombe wall or sunspace with vents through it can be used as a thermosiphon.  If vents are placed at the top of the glazing, then air from the room will be pulled out by convection in the air gap between glazing and mass wall.  This form of passive ventilation is called a solar chimney. 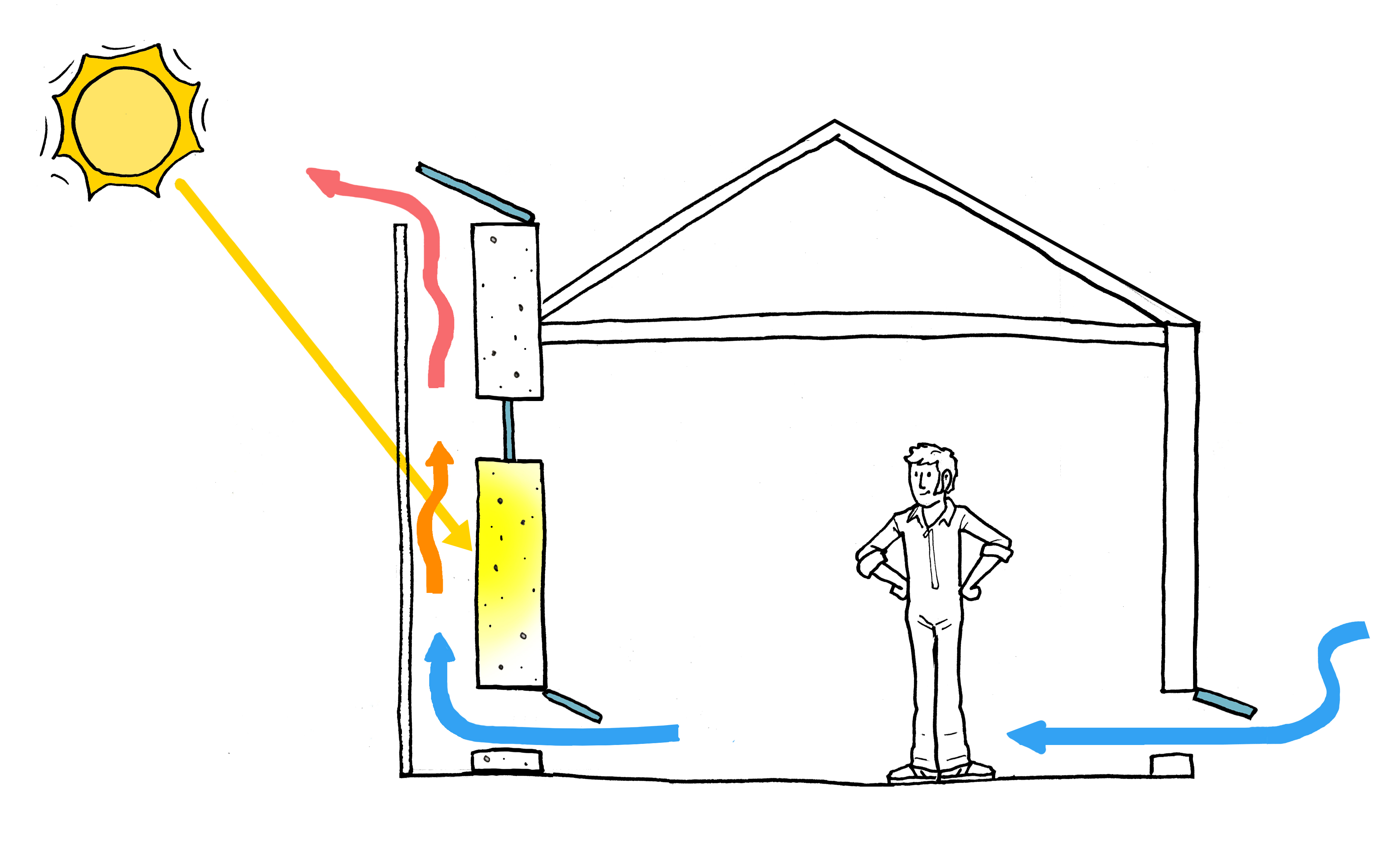 A Trombe wall acting as a solar chimney