Direct gain is the heat from the sun being collected and contained in an occupied space. This heat can be retained by the building’s thermal mass, or can be avoided with reflective materials.

Good direct gain is measured or predicted by determining how much heat energy the sun delivers to the interior space throughout the day and year. In many climates, more heat gain is desired in the winter, when the sun is low, while less or none is desired in the summer. Likewise, it is usually desired more in the morning, but less or none in the late afternoon. Direct gain is not the total amount of incident solar radiation, since not all of that will enter and be retained in the space. 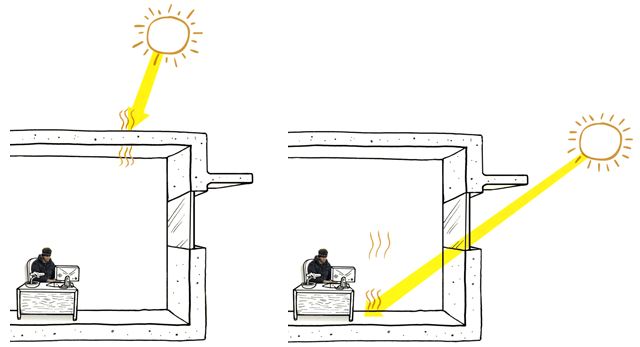 Direct gain through walls / roofs, and through glazing

Sunlight can heat a space through the solid walls or roofs of the envelope. Sunlight also enters the space through windows, and heats interior surfaces.

Some of the sun's light is long-wavelength radiation, which is heat; in addition, the light of any wavelength absorbed by surfaces turns into heat in those materials. These materials then warm people in the room by conducting heat to them directly, by warming air which carries heat by convection, and by reradiating their heat.

Aperture placement and area is an enormous factor in the amount of heat that is gained, at what times of day, and at what seasons of year. For most latitudes, it is optimized by large areas of equator-facing glazing, with the major living spaces exposed directly behind. Shades block excess sun at warmer times and allow the sun's heat in at cooler times.

Smart orientation, sizing, and shading must be combined with smart selection of glazing properties. Different kinds of glazing can pull the sun's heat into the interior, or reject it, or let interior heat escape. Several glazing types may be appropriate on different faces of the building.

The same large areas of glazing that let heat in during the day can also readily let heat out at night. Heat can escape through windows both through direct heat transfer, or by allowing long-wave radiation to pass through as interior materials re-radiate their heat. Thus, some form of nighttime protection should be incorporated to minimize any conduction and convection losses through windows. Thick drawn curtains with a closed cornice board or "pelmet" to seal the top can be used, or insulated internal/external roller shutters.

The amount of sunlight absorbed by a material (and thus converted to heat) depends on its color. Light colored surfaces will bounce light around within the space, distributing it over a greater number of surfaces. Dark colored materials will absorb most of the incident energy as soon as it strikes. Both of these can be useful, depending on the situation.

Roofs often need to avoid direct solar gain in hot climates. "Cool roofs" use light colors to reflect most of the sun's heat. Cool roof surfaces are often far more effective than simply adding roof insulation. For example, the surface of a black roof can easily get 40°C (75°F) hotter than the surface of a white roof on a sunny day. 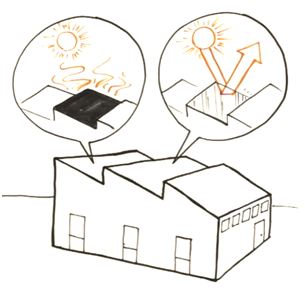 One common measurement of this is albedo, the ability of the material to reflect sunlight. Light colored roofs have “high albedo.” But the measurement most often used for codes and standards1 is Solar Reflectance Index (SRI), which considers both reflectance and emissivity2.

To be considered a "cool roof" by common standards1 requires an SRI above 78 for flat roofs, and above 29 for steep roofs. Some typical values are below. 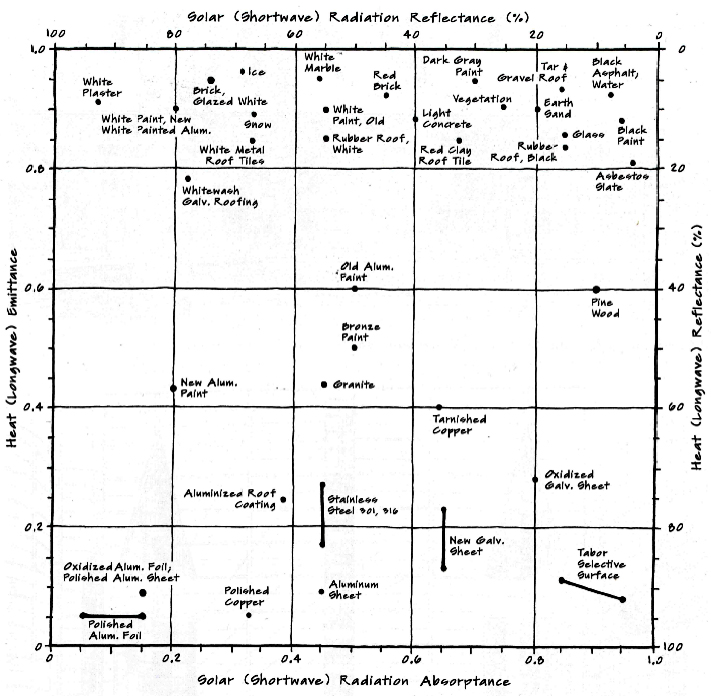 Solar Reflectance and absorption vs. heat reflection and emittance, for common materials.
(click to enlarge.) From Sun, Wind, and Light.

2 Emissivity is the ability of the roof surface to radiate absorbed heat. Measured on a scale of 0 to 1, where 1 is the most emissive (doesn’t retain as much heat). Low emissivity may benefit buildings in colder climates by retaining heat and reducing the heating load. To prevent the heat island effect, high emissivity is preferable.