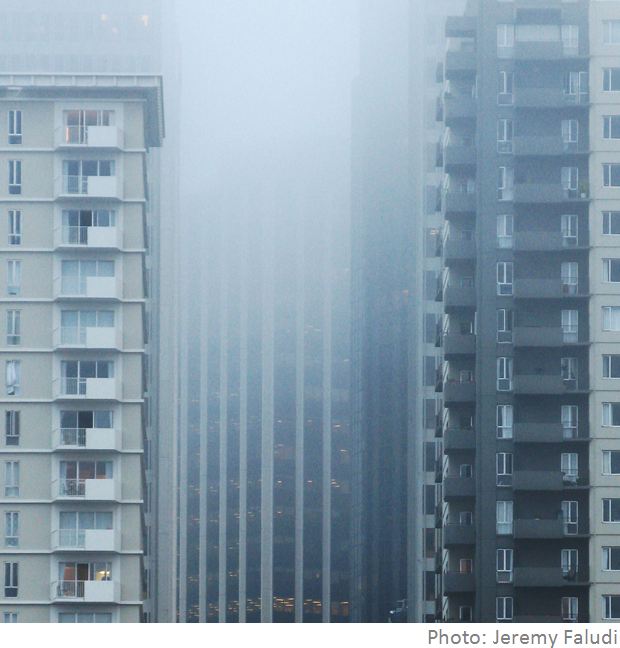 Fog is the extreme of humidity

Humidity is most often measured by relative humidity, which is the ratio of moisture in the air to the maximum possible saturation of air at a given temperature. The warmer the air is, the more water vapor it can hold. Absolute humidity is the actual amount of water molecules in the air.

Psychrometric charts can help plot absolute and relative humidity data alongside temperature for your site to help you understand how much humidity control you might need in your design. The horizontal lines are absolute humidity, while relative humidity is shown in the curved lines, from 10% at the lowest to 100% (the dewpoint) at the upper left edge of the graph. 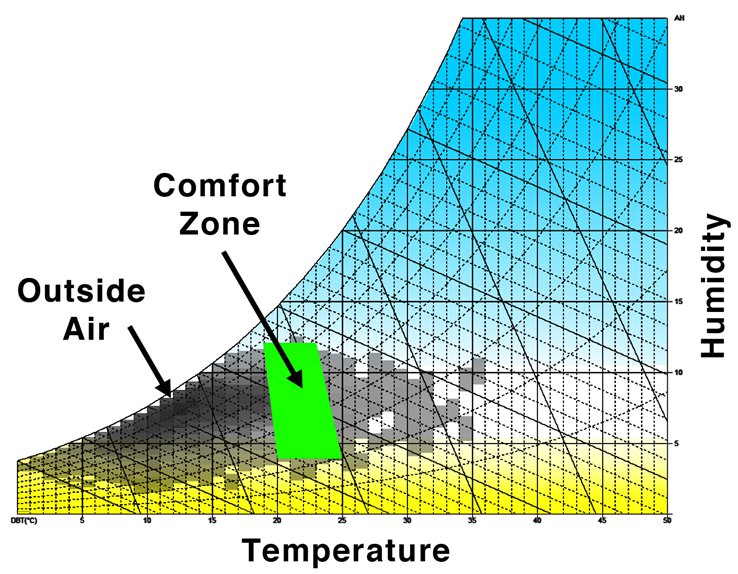 Low and high humidity shown in a psychometric chart

The energy efficiency of dehumidification is measured by a device's "energy factor".  This is the liters of water removed from the air per kWh of energy consumed. A higher energy factor means greater efficiency, with performance ranging from 1 L/kWh to over 4 L/kWh.

Comfortable humidity ranges vary by temperature (the hotter the temperature, the less humidity is comfortable), but are generally between 35% - 50% relative humidity.  See Human Comfort for details.

To avoid mold growth, it’s ideal to keep humidity levels below 40%. Also be sure that shower, laundry, and cooking areas are well-ventilated.

To keep humidity within comfort ranges, the building's thermostats should have humidity sensors in them.  If they do not, you can specify separate hygrometer systems that can control humidifiers and dehumidifiers separately from the rest of the HVAC system.  However, both comfort and energy efficiency will be better when humidity control is integrated with temperature control.

Mechanical dehumidifiers over-cool incoming air below the dewpoint (the point where it can no longer hold all the water vapor that was in solution). As a result, the water condenses on the cooling coils.  Afterwards, the cold dry air is heated back up again to the desired temperature and/or mixed with untreated air to provide air at the desired temperature and humidity to occupied spaces.

The water, now in droplets, drips off the condenser coils so that more water vapor can condense there.  It may fall into a catch basin that drains to a waste-water stream, or is periodically emptied by building occupants or staff.  In exterior window-mounted units, it often simply drips on whatever or whoever is below. 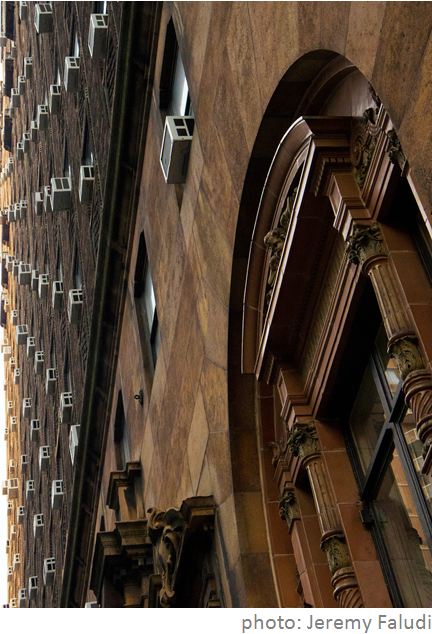 Desiccant dehumidification is a less common but more energy-effective means of lowering humidity.  Its effectiveness is due to using heat rather than electricity--this means it can run off of the waste heat of other processes.  As such, the energy to run it can be "free", both financially and environmentally.

A packet of desiccant pellets in packaging

A desiccant is a chemical (usually a solid or liquid) that absorbs moisture out of the air.  Outdoor air is simply passed through a porous wheel of solid desiccant, or through a shower of liquid desiccant, and its humidity is lowered.

However, the chemical eventually saturates, and in order to be used again it must be "recharged" by heating it up until the absorbed water evaporates.  Water driven off the recharging desiccant goes right back into the air. Systems are designed so that this air is separated from the incoming air stream and is exhausted to the outside.

Solid desiccants are usually on a wheel which slowly rotates between the incoming air stream and a small exhaust duct with a heater.  Roughly ¾ of the time the desiccant will be absorbing moisture out of incoming air, and the remaining ¼ of the time it will recharge. 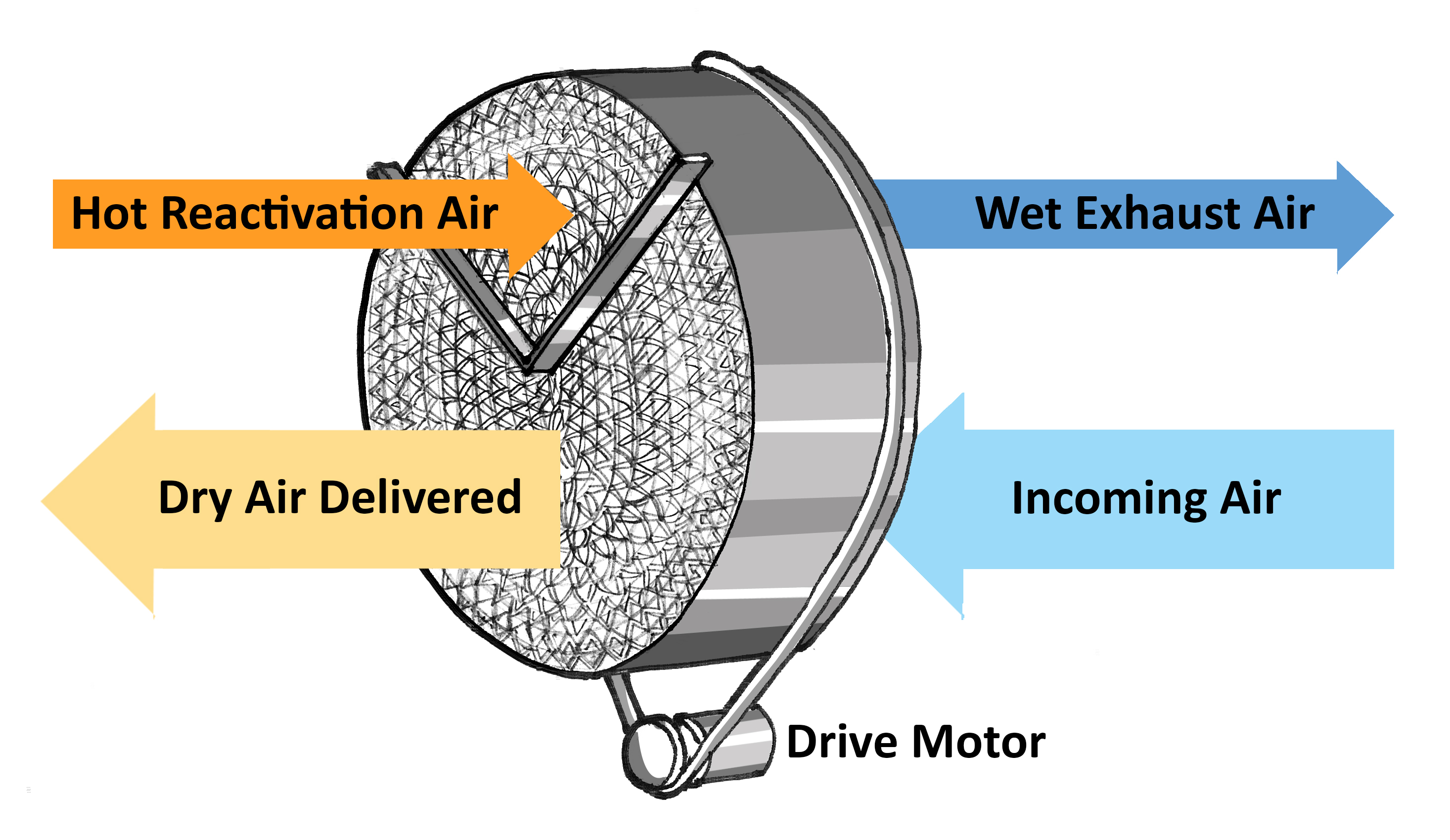 How a desiccant wheel is used.