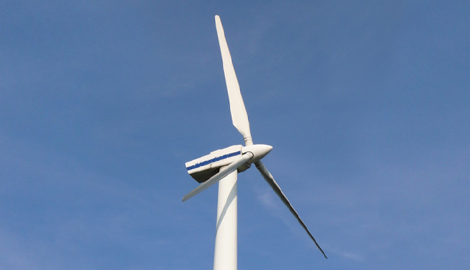 Wind power production at any given moment is measured in watts, but the important variable to measure is energy generation (kWh) per day or month or year. Because of wind's intermittency, turbines may generate very high wattages some of the time but low wattages or no wattage at other times.

There are several kinds of turbines, each with their own advantages and disadvantages. The key to choosing good wind generators is to properly predict the wind’s behavior of a specific location.

Wind turbines are generally listed by their peak wattage, and it is easy to make the mistake of assuming that a 5kW turbine will generate more than a 3kW turbine. However, larger turbines are sometimes too heavy to spin well at low wind speeds, so a location with low average wind speeds may find a smaller turbine actually generates more power.

Any commercial wind turbine will have a specification sheet showing a graph of energy generation vs. average wind speed. This is what should be used to judge energy generation, not the maximum power rating.

Below is a graph combining the specifications of two different commercial wind turbines. In this case, the larger capacity turbine only generates more energy annually if the site has very high winds. At more common annual average wind speeds, the smaller turbine shown here generates more than double the energy of the larger model.

Wind speed varies roughly by the square root of the change of altitude, so the tops of buildings will experience faster wind than the ground level. This rate is important when determining the height for wind turbines. If you increase the tower height by 4x, you double the power (increase power by 100%). Not surprisingly, wind power generation is much more effective on tall towers than it is near ground level. This means that wind generators are most effective and economical when they are very large and very high in the air. Most wind maps measure winds at a height of 50 m (150 ft) or higher.

Wind turbines generate some noise, both because of aerodynamic drag and because of the vibrations of their own moving parts. For small household-scale units, the noise may be less than the home's air conditioner. Very large-scale units may be 100 dB or more.[1]

Because of noise and vibration, large wind generators integrated with buildings should incorporate vibration-damping measures. This can raise engineering and construction costs. However, noise falls with distance so even very large turbines located just 300m (1,000 ft) away from people will cause no more noise than a household refrigerator.

Safety for birds and bats may be a concern for large-scale turbines, though small systems cause fewer problems, and government statistics show that building windows kill 3,000 to 30,000 times as many birds per year as wind turbines. Savonius style turbines are inherently bird- and bat-safe because of their visual opacity and low rotation speeds.