While most biomimicry points to a specific organism for inspiration, it can be less time-consuming and more broadly applicable to find design strategies in natural principles that other scientists, designers, and engineers have identified. 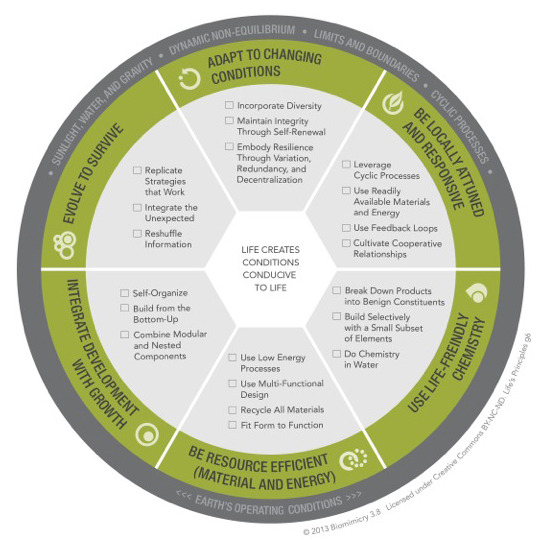 People have been practicing biomimicry since before Leonardo DaVinci, so there are many lists of nature's principles.  One such list is the one created by Janine Benyus and others at Biomimicry 3.8, organized into the Design Lens above.  A few of the items are explained here, as examples:

Evolution: The central cornerstone of biology, evolution does not plan solutions, but simply tries many things at random and sees what works best, then repeats the process countless times to find an optimized solution.  Genetic algorithms are an example of imitating evolution in design.  Kevin Kelly describes it as "letting go, with dignity."1  This means design without authorship--not the traditional process of artists creating their works directly, but creating the right landscape for possibilities to emerge from.

A less sophisticated (but much easier and still useful) example of evolution is the iterative design process.  Iterative design is making multiple prototypes, user-testing them to find the favorites, then mixing and matching elements to create another generation of prototypes which are in turn user-tested, ad infinitum.  This is the type of process that is practiced by design firms like IDEO. 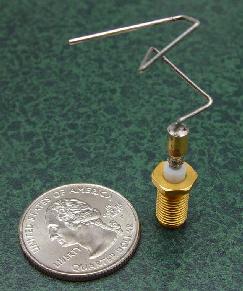 This NASA spacecraft antenna owes its odd shape
to genetic algorithms,which optimized it in ways a
human engineer would never have thought of. (Image from NASA)

Recycle All Materials, also known as "Waste = Food" in McDonough and Braungart's book Cradle to Cradle2:  This is one of the most important principles for sustainability.  It means waste should be treated as a resource to provide more value.  Waste can include energy as well, not merely materials.  The field of industrial ecology is based on this, creating closed-loop resource flows instead of mines and landfills.  Building manufacturing systems with the long-term stability needed for webs of interdependent resource flows can be a challenge.  Cradle to Cradle's concept of biological nutrients and technical nutrients is extremely useful here, as are Design for Lifetime strategies.

The Kalundborg industrial ecosystem has companies, the city, and local farmers
all connecting to turn waste into resources for each other. (source, used with permission)

Do chemistry in water, at ambient temperature & pressure: This principle (from both Janine Benyus and Steven Vogel3) is fairly self-explanatory.  Most industrial chemistry is petroleum-based, happens at high temperatures and/or pressures, and often involves toxics; this makes chemistry highly energy-intensive, potentially hazardous, and dependent on non-renewable resources.  Biological chemistry is generally isothermal and water-based.  However, it is also extremely complicated, and thus has been hard for researchers to understand and use.  Chemical and biotech industries are making great strides in this direction, and potential for invention abounds.  In the long run, water-based isothermal chemistry should be cheaper as well as greener than today's industrial chemistry, because of the reduced energy-intensity, reduced safety hazards, and plentiful (renewable) raw materials. 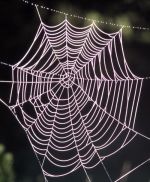 Spider silk is not only stronger than steel and tougher than Kevlar,
but it does not require thousand-degree temperatures or fossil fuel feedstocks.
It is manufactured at ambient temperature and pressure
in water-based chemistry. (Photo: nps.gov)

Be locally attuned and responsive: As Janine Benyus says, organisms are information-driven, with local and timely expertise.   Trees change form from summer to winter; many animals change both form and behavior.  For buildings, this means responding to the moving sun, the seasons, changes in the weather, even changes in occupancy.  For products, this means staying useful to different users and different circumstances.  This extends product lifetime, and can even allow one product to eliminate the need for others (Which is another strategy in the wheel, Multifunctional Design.) 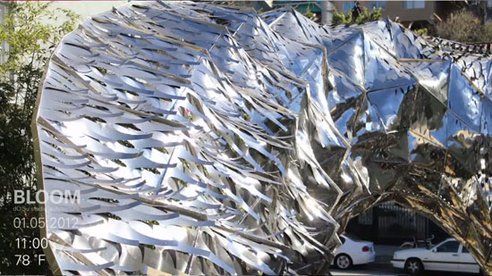 A shade structure made of bimetal strips auto-adjusts its degree of openness
to the temperature, like human skin, for passive cooling.
See video by Doris Kim Sung, image used with permission.

Build from the bottom up: You can do this on two levels: On the component level, you can build things additively (such as 3D printing, or additive circuit printing instead of starting with blocks of material that you cut away or liquids that you mold; or you can use small pre-fab parts that combine to form the whole assembly.  This should reduce waste and increase your design flexibility.  On the system level, designing from the bottom up means designing networks, not pyramids.  The nodes of a system should create the  structure of the whole by themselves, through their interrelations.  Nature shows this method to be more robust, flexible, and scalable than a system architected from a top-down plan. 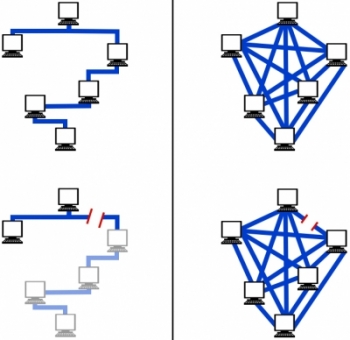 Other principles of nature not included in the wheel above include:

Cooperate AND compete, not just one or the other: For the first hundred years of biology, most people described Darwinism as a world of harsh and pitiless competition; today's biologists emphasize the cooperative interdependencies of creatures with each other in their ecosystems.  Both are true, and both are useful in their own ways.  Dee Hock, the creator of the VISA credit card system, coined the word "chaordic" to describe a partly-chaotic, partly-ordered system where the interdependencies can be both cooperative and competitive at the same time, as they are in natural ecosystems.  He structured the VISA system like this, so that many banks could compete with each other chaotically, but there were enough rules to create a playing field they all could agree on.

This phenomenon also appears in hardware and software with open standards: interested parties cooperate to choose arenas (such as a broadcast spectrum or file format) and then compete within that arena, feeling that their cooperation creates a larger total market, saves them money, gives them more robust supply chains, and otherwise provides more benefit than pure competition would. 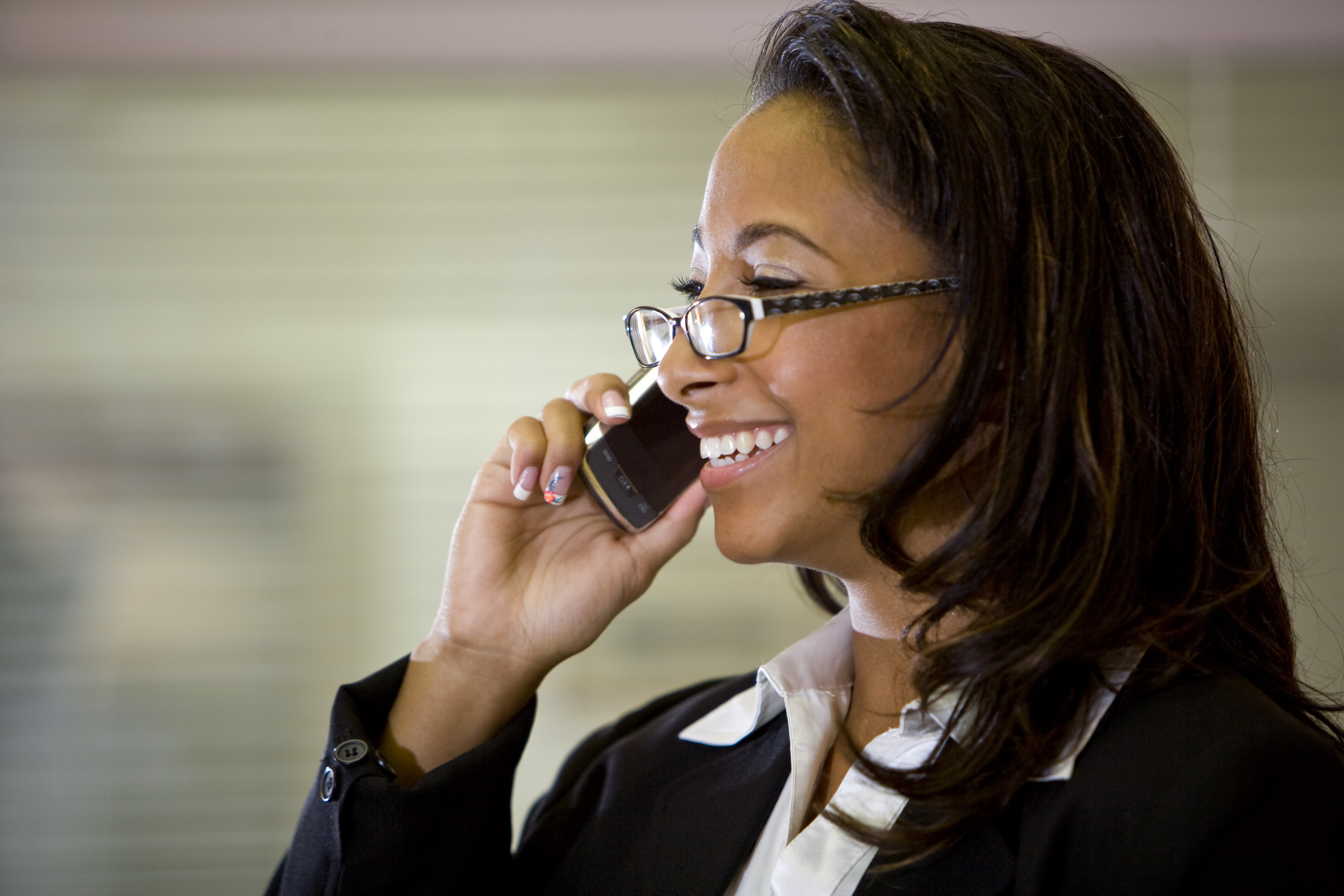 The GSM mobile phone network, while not biomimetic, is an open standard.
Phone companies cooperatively agreed on the standard as a playing field to compete on.

Organize fractally: A fractal is a form or pattern that is similar to itself at multiple levels.  This is a way of planning for growth from the bottom up, or detail from the top down.  The logarithmic spiral of a snail's shell did not evolve because it is pretty, but because it allows for perpetual growth without changing shape.  When the snail grows to twice its original size, it does not need to tear down walls to expand its house, as most architects would; instead, it just keeps adding more shell in the same shape.  Likewise, the extremely detailed and complex shape of a tree can be generated by a very simple branching algorithm. Fractal systems do not need different planning for different scales--it is all the same.  Fractals often do not look exactly alike at different scales, but still have self-similarity. 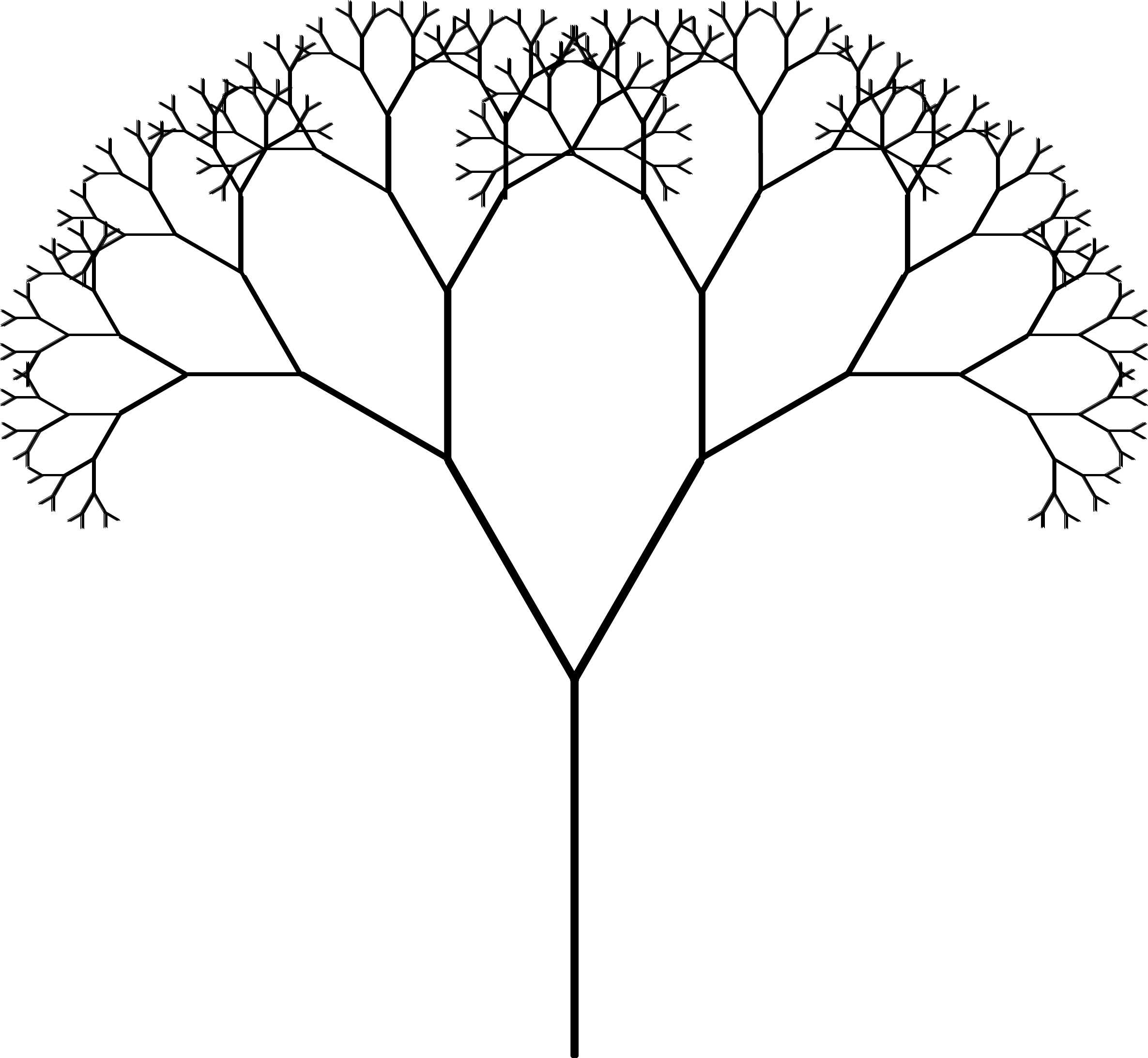 Optimize the system rather than maximizing components: This is general whole-systems-thinking advice, but Benyus points out it is ubiquitous in biology.  Organisms always have to trade off multiple dimensions of costs and benefits: greater size comes with a greater need for food and sturdier bones; more leaf area for photosynthesis comes with increased force from wind and rain in storms; etc.
One way to optimize the system is to perform as many functions as possible with as few components as possible.  To help you perform this balancing act, you can explicitly list (or better, sketch) all the factors you must balance, to look for synergies.  Optimizing the system can achieve what Amory Lovins calls "tunneling through the cost barrier", where you escape from incremental improvements of individual components to a radical optimization of the whole system.  To do this, one variable may be made slightly worse to make the whole system better--for instance, more money might be spent on a building’s insulation, but the extra insulation could eliminate the need for a heater, thus saving more money than the extra insulation cost, as well as providing better comfort.

Design for swarm: The key to this is designing many small, simple things that work together to become a large sophisticated system.  For simplicity, in industry we usually design one function at a time, building separate pieces of hardware or software for each task and then assembling them all together to make the final product.  This method has many advantages (such as modularity and easy debugging), but in systems built this way, the whole will just be the sum of its parts.  One of the signatures of living systems (and other complex systems) is "emergent phenomena", where the whole is literally greater than the sum of its parts.  As Kevin Kelly describes it in Out Of Control, an individual bee has a small brain and simple behavior, but combining many bees into a swarm creates a new super-organism with quite sophisticated behavior. Emergent phenomena are difficult (perhaps impossible) to predict analytically, but they can be simulated in virtual worlds.

Designing for emergent phenomena can do much more with less.  For instance, Regen Energy control systems reduce peak electricity use of building HVAC and other equipment; they do not require the cost or administrative attention of a centralized server, because each individual controller coordinates directly with all the other controllers in a method based on how bees swarm.  Designing for emergence can also help avoid unintended consequences, such as the suburban sprawl and urban blight that unexpectedly came from the invention of the automobile.  It can be a powerful principle for sustainable design, building robust systems with little material or infrastructure. 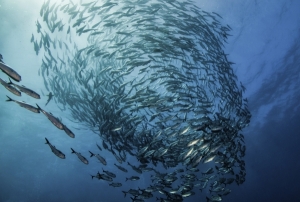 A method of classifying problem-solving principles, called TRIZ, claims there are just 40 methods ever used by any people to innovate new products, buildings, and systems.  However, evolution works very differently from human minds.  Researchers at the University of Bath have extended TRIZ to biology, cataloging and analyzing the many more than 40 methods that nature has used to "invent" new solutions in countless organisms around the world.

They have found there is only a 12% overlap between technology and nature in problem-solving techniques , and "while technology solves problems largely by manipulating usage of energy, biology uses information and structure, two factors largely ignored by technology."  The researchers have not published their full list of nature’s innovation methods, but use their database for consulting. For an overview of this work, see the papers "Biomimetics: its practice and theory" and "TRIZ Evolution Trends in Biological and Technological Design Strategies."

1From Out Of Control by Kevin Kelly.